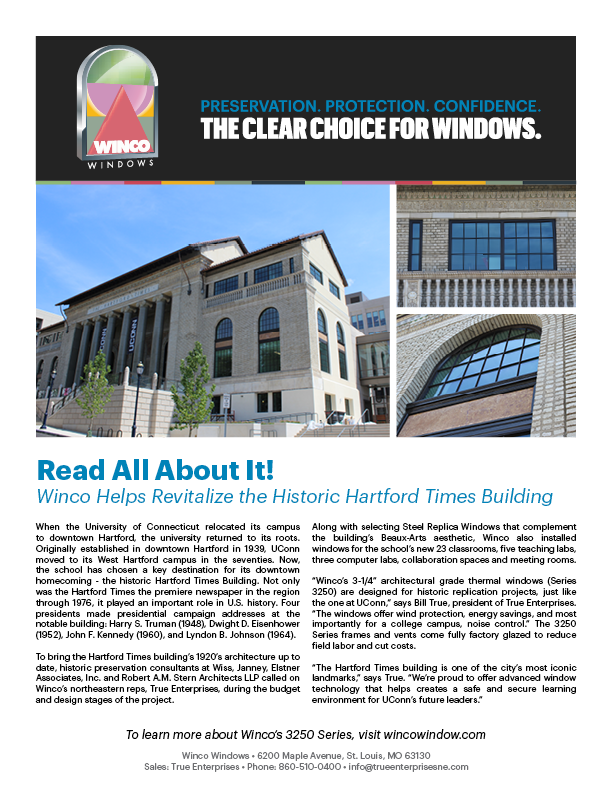 Read All About It! Winco Helps Revitalize the Historic Hartford Times Building

When the University of Connecticut relocated its campus to downtown Hartford this summer, the university returned to its roots. Originally established in downtown Hartford in 1939, UConn moved to its West Hartford campus in the seventies. Now, the school has chosen a key destination for its downtown homecoming - the historic Hartford Times Building. Not only was the Hartford Times the premiere newspaper in the region through 1976, it played an important role in U.S. history. Four presidents made presidential campaign addresses at the notable building: Harry S. Truman (1948), Dwight D. Eisenhower (1952), John F. Kennedy (1960), and Lyndon B. Johnson (1964). To bring the Hartford Times building’s 1920’s architecture up to date with state of the art technology, historic preservation consultants at Wiss, Janney, Elstner Associates, Inc. and Robert A.M. Stern Architects LLP called on Winco’s northeastern reps, True Enterprises during the budget and design stages of the project. Along with selecting Steel Replica Windows that complement the building’s Beaux-Arts aesthetic, Winco also installed windows for the school’s new 23 classrooms, five teaching labs, three computer labs, collaboration spaces and meeting rooms. Winco’s 3-1/4” architectural grade thermal windows (Series 3250) are designed for historic replication projects, just like the one at UConn,” says Bill True, president of True Enterprises. “The windows offer wind protection, energy savings, and most importantly for a college campus, noise control.” The 3250 Series frames and vents come fully factory glazed to reduce field labor and cut costs. “The Hartford Times building is one of the city’s most iconic landmarks,” says True. “We’re proud to equip the building with advanced window technology that creates a safe and secure learning environment for UConn’s future leaders.” To learn more about Winco’s 3250 Series, visit wincowindow.com Winco Windows • 6200 Maple Avenue, St. Louis, MO 63130 Or for Sales: True Enterprises • Phone: 860-510-0400 • info@trueenterprisesne.com

View this product at wincowindow.com