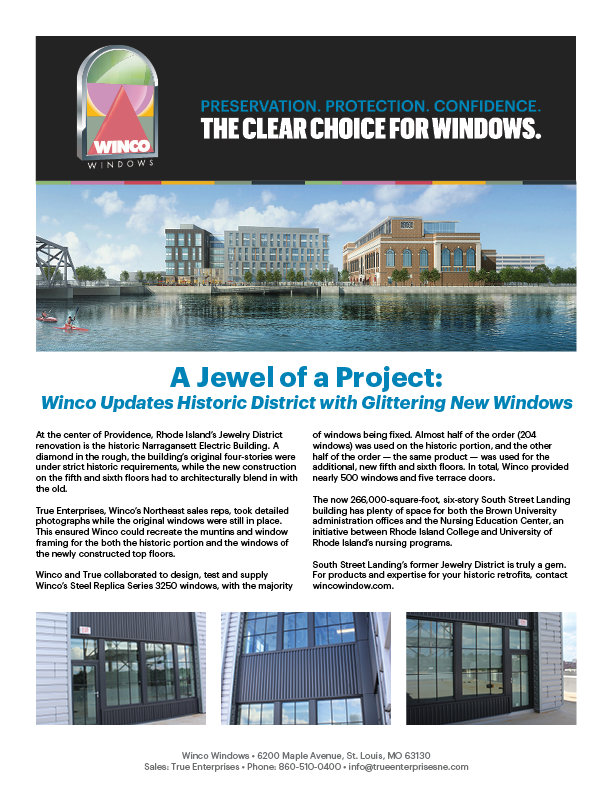 A Jewel of a Project: Winco Updates Historic District with Glittering New Windows

At the center of Providence, Rhode Island’s Jewelry District renovation is the historic Narragansett Electric Building. A diamond in the rough, the building’s original four-stories were under strict historic requirements, while the new construction on the fifth and sixth floors had to architecturally blend in with the old. True Enterprises, Winco’s Northeast sales reps, took detailed photographs while the original windows were still in place. This ensured Winco could masterfully recreate the muntins and window framing for the both the historic portion and the windows of the newly constructed top floors. Winco and True collaborated to design, test and supply Winco’s Steel Replica Series 3250 windows, with the majority of windows being fixed. Almost half of the order (204 windows) was used on the historic portion, and the other half of the order — the same product — was used for the additional fifth and sixth floors. In total, Winco provided nearly 500 windows and five terrace doors. The now 266,000-square-foot, six-story South Street Landing building has plenty of space for both the Brown University administration offices and the Nursing Education Center, an initiative between Rhode Island College and University of Rhode Island’s nursing programs. South Street Landing’s former Jewelry District is truly a gem. For products and expertise for your historic retrofits, contact wincowindow.com. Winco Windows • 6200 Maple Avenue, St. Louis, MO 63130 Or for Sales: True Enterprises • Phone: 860-510-0400 • info@trueenterprisesne.com

View this product at wincowindow.com